LABORATORY OF BIOCATALYSIS AND BIOTRANSFORMATION 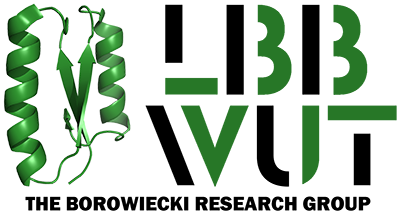 Welcome to the website of our bioorganic chemistry research group at the Faculty of Chemistry of the Warsaw University of Technology!

Our research is aimed at the development of new synthetic methodologies based on the application of enzymes or whole-cells systems as biocatalysts. Therefore, we are highly interested in stereoselective biotransformations of racemic and prochiral compounds as well as mechanistic investigations including molecular insights of catalytic features of enzymes by applying modern computational calculations.

Although our studies are centered at biocatalysis, we also remain true to our broad scientific interests and thus simultaneously lead several medicinal chemistry projects going in different directions. Among them are rational design, synthesis and evaluation of novel heterocyclic compounds as biologically active agents possessing desired anti-cancer and/or anti-microbial activities. During these projects we apply computational structural modeling of ligand-receptor interactions for a better understanding of a protein’s structure and function at the molecular level to develop novel and more potent inhibitors.

We also investigate the chemistry and biological activity of hybrid molecules (containing various pharmacophores) that would exhibit both in vitro antiproliferative potency and an in vivo nontoxicity as well as inhibit the virulence of Candida albicans. We strongly believe that such derivatives will become lead compounds for further development of more promising chemotherapeutics averting cancer-associated biofilm Candida infections in immunocompromised oncological patients.

We are simple synthetic organic chemists who enjoy working with enzymes both as biocatalysts and molecular therapeutic targets as well. Since biocatalysis has become crucial for chemical synthesis, we hold transdisciplinary way of thinking about methodology development and remain open-minded for novel synthetic implementations of enzymes that would support more sustainable manufacturing processes with reduced impact on the environment

Why do we love enzymes?

Enzymes have matured by evolution over billions of years into extremely efficient catalysts that initiates and accelerates various types of chemical reactions, and what is even more spectacular, which can facilitate those reactions with unmatched chemo-, regio- and enantio-selectivity at ambient conditions. Tailored biocatalysts allow converting substrates with efficient manufacturing by improving product purity and yields, reducing production process steps, eliminating toxic by-products from the production process, obviating the cautious handling of sensitive materials, and by limiting the need for capital expenditures, what brings lower costs and greater profitability.

Moreover, biotransformations of non-natural organic compounds employing isolated enzymes or whole microbial cells are essential for the synthesis of high value-added products including pharmaceuticals, agrochemicals, fine chemicals, fuels, functional materials, flavors and fragrances, that are currently difficult or impossible to produce by conventional chemical approaches. Beside the above-mentioned facts, enzymatic catalysis as a major pillar of so-called applied biotechnology is considered to be one of the fundamental methods of green chemistry, the concept which successfully began to replace conventional chemical processes that are usually characterized by undesired energy consumption from high temperatures or pressures, and by waste generation from harsh for environment hazardous reagents or catalysts composed of toxic transition-metals. Moreover, the potential of enzymes in terms of the broad scope of reactions which they can trigger has not yet been fully exploited.

Therefore, the development and discovery of new biocatalysts with improved capabilities, the optimization of their useful functions, and their subsequent assembly into novel synthetic applications including sustainable preparation of valuable products became far beyond the scopes of the academia only, but also turned to be one of the main goals of chemical industry in its cutting-edge technologies. Considering the above-stated facts as well as a broad spectrum of other advantages, BIOCATALYSIS became our first love!

We share a passion for science and discovering the foundations of new complex phenomena by following crucial values such as scientific excellence, high ethical standards and positive research culture. We try to break the traditional boundaries between chemistry and biology and hope to deliver knowledge and lab training that would influence the next generation of scientists.

See you in the Lab

We run our projects, but we are also opened at new ideas, advises and potential collaborations. So do not hesitate, we invite you in advance to cooperate with us!

The only place where success comes before work
is in the dictionary; thus, the hard work is never negotiable!

– Vince Lombardi and our thought on it –

Undisciplined geniuses do not change this World for the better! Therefore, we are looking for young people who are not only wise, brilliant or just hardworking, but who are also talented for hard work and fully aware of the fact that el esfuerzo no es negociable!

Students and all junior faculty members as well as an ‘Erasmus-exchangers’ whose research interests include organic synthesis, biocatalysis, stereochemistry and/or medicinal chemistry are welcome! Come and meet us live to see for yourself that we provide research-led teaching as well as the optimal and friendly environment to train lab skills! 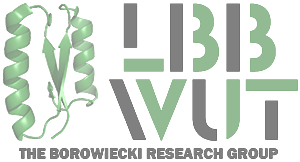 Laboratory of Biocatalysis and Biotransformation (LBB-WUT)

Chair of Drug and Cosmetics Biotechnology